…to Emerald City Comicon!  The other day I saw a bus placard proclaiming that Comicon was approaching and realized that this year I actually had a chance to go – wowza!

Usually I hear it about it afterward – either from Jen over at Epbot or when Wil Wheaton recaps his time in Seattle on his blog.  And I kick myself for missing it.  No, not literally!

Even if you’ve been here before you probably wouldn’t take me for a geeky nerdish type.  I’m not in-your-face geeky, but more of a stealth geek; I just have that sort of personality.  This is my geekiest shirt: 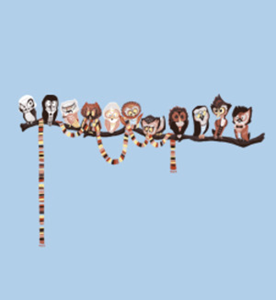 For you non-geeks out there, that’s a Threadless design called Doctor Hoo.  I first saw it over at Cakewrecks in Jen’s Threadless cake post – yes, it really was turned into a cake!  If I have a chance I’ll go search for that post and link to it in an update.  I wear this to work and most people comment on how cute the owls are.  Few know what they represent.  See?  Stealth geek right here!

I haven’t always been a geek; I blame Hubs.  Nearly sixteen years ago he introduced me to Doctor Who, Farscape and others he’d been enjoying forever.  Together we watched Firefly and Star Gate, discovered the new Doctor, explored Warehouse 13, and revisited Star Trek and Star Wars.

In the process our youngest daughter absorbed the geekiness and I’m proud to say she’s a full fledged grown-up lady geek/gamer.  When I sent her the Comicon link yesterday and asked if she had any interest, she responded true to form:

So peeps, anyone have an easy peasy costume idea for me?  If Hubs goes his costume is simple – so long as we can find a Wookie outfit in “Small Giant”!  Bwahahahahaha!

What say you? Cancel reply